Skip to main content
2014
Roques, Lionel, Mickaël D. Chekroun, Michel Cristofol, Samuel Soubeyrand, and Michael Ghil. “Parameter estimation for energy balance models with memory.” Proceedings of the Royal Society of London A: Mathematical, Physical and Engineering Sciences 470, no. 2169 (2014). Publisher's Version Abstract
We study parameter estimation for one-dimensional energy balance models with memory (EBMMs) given localized and noisy temperature measurements. Our results apply to a wide range of nonlinear, parabolic partial differential equations with integral memory terms. First, we show that a space-dependent parameter can be determined uniquely everywhere in the PDE’s domain of definition D, using only temperature information in a small subdomain E⊂D. This result is valid only when the data correspond to exact measurements of the temperature. We propose a method for estimating a model parameter of the EBMM using more realistic, error-contaminated temperature data derived, for example, from ice cores or marine-sediment cores. Our approach is based on a so-called mechanistic-statistical model that combines a deterministic EBMM with a statistical model of the observation process. Estimating a parameter in this setting is especially challenging, because the observation process induces a strong loss of information. Aside from the noise contained in past temperature measurements, an additional error is induced by the age-dating method, whose accuracy tends to decrease with a sample’s remoteness in time. Using a Bayesian approach, we show that obtaining an accurate parameter estimate is still possible in certain cases.
Groth, Andreas. “Interannual variability in the North Atlantic SST and wind forcing.” Seminar at International Research Institute for Climate and Society, Columbia, 2014. Abstract 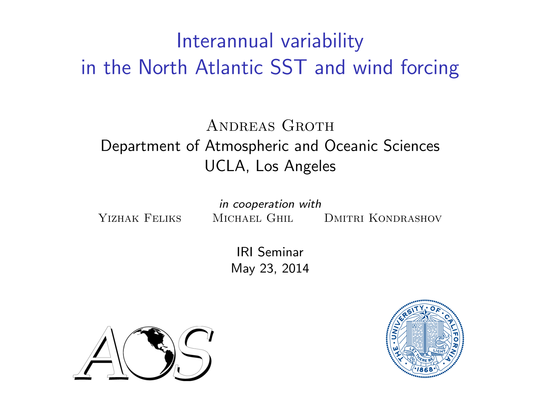 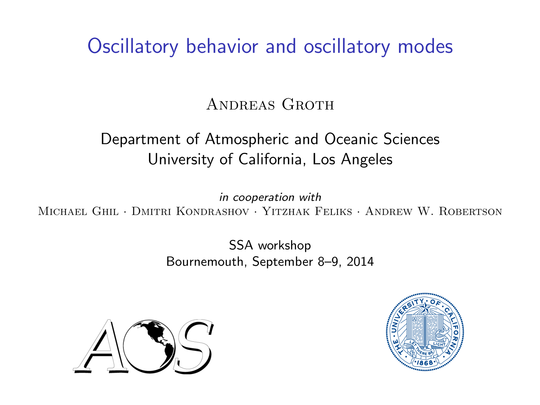 Despite the importance of uncertainties encountered in climate model simulations, the fundamental mechanisms at the origin of sensitive behavior of long-term model statistics remain unclear. Variability of turbulent flows in the atmosphere and oceans exhibits recurrent large-scale patterns. These patterns, while evolving irregularly in time, manifest characteristic frequencies across a large range of time scales, from intraseasonal through interdecadal. Based on modern spectral theory of chaotic and dissipative dynamical systems, the associated low-frequency variability may be formulated in terms of Ruelle-Pollicott (RP) resonances. RP resonances encode information on the nonlinear dynamics of the system, and an approach for estimating them—as filtered through an observable of the system—is proposed. This approach relies on an appropriate Markov representation of the dynamics associated with a given observable. It is shown that, within this representation, the spectral gap—defined as the distance between the subdominant RP resonance and the unit circle—plays a major role in the roughness of parameter dependences. The model statistics are the most sensitive for the smallest spectral gaps; such small gaps turn out to correspond to regimes where the low-frequency variability is more pronounced, whereas autocorrelations decay more slowly. The present approach is applied to analyze the rough parameter dependence encountered in key statistics of an El-Niño–Southern Oscillation model of intermediate complexity. Theoretical arguments, however, strongly suggest that such links between model sensitivity and the decay of correlation properties are not limited to this particular model and could hold much more generally.

The present work applies several advanced spectral methods to the analysis of macroeconomic fluctuations in three countries of the European Union: Italy, The Netherlands, and the United Kingdom. We focus here in particular on singular-spectrum analysis (SSA), which provides valuable spatial and frequency information of multivariate data and that goes far beyond a pure analysis in the time domain. The spectral methods discussed here are well established in the geosciences and life sciences, but not yet widespread in quantitative economics. In particular, they enable one to identify and describe nonlinear trends and dominant cycles –- including seasonal and interannual components –- that characterize the deterministic behavior of each time series. These tools have already proven their robustness in the application on short and noisy data, and we demonstrate their usefulness in the analysis of the macroeconomic indicators of these three countries. We explore several fundamental indicators of the countries' real aggregate economy in a univariate, as well as a multivariate setting. Starting with individual single-channel analysis, we are able to identify similar spectral components among the analyzed indicators. Next, we consider combinations of indicators and countries, in order to take different effects of comovements into account. Since business cycles are cross-national phenomena, which show common characteristics across countries, our aim is to uncover hidden global behavior across the European economies. Results are compared with previous findings on the U.S. indicators \citepGroth.ea.FEEM.2012. Finally, the analysis is extended to include several indicators from the U.S. economy, in order to examine its influence on the European market.

The atmosphere, hydrosphere and cryosphere form a fully coupled climate system. This system exhibits a number of large-scale phenomena, such as the El Nino Southern Oscillation (ENSO), the Asian Monsoon, the North Atlantic Oscillation (NAO), and the Madden-Julian Oscillation (MJO). While these modes of variability are not exactly periodic, they are oscillatory in character, and their state is monitored using so-called climate indices. Each of these scalar indices is a combination of several climate variables. Here, we use a comprehensive set of 25 climate indices for time intervals that range between 1948 and 2011, and estimate an optimal set of lags between these indices to maximize their correlation. We show that most of the index pairs drawn from this set present a significant correlation on interannual time scales. It is also shown that, on average, about two-thirds of the total variability in each index can be described by using only the four leading principal components of the entire set of lagged indices. Our index set's leading orthogonal modes exhibit several interannual frequencies and capture separately variability associated with the North Atlantic and the North Pacific. These modes are associated, in turn, with large-scale variations of sea surface temperatures.

This paper explores the three-way interactions between the Indian monsoon, the North Atlantic and the Tropical Pacific. Four climate records were analyzed: the monsoon rainfall in two Indian regions, the Southern Oscillation Index for the Tropical Pacific, and the NAO index for the North Atlantic. The individual records exhibit highly significant oscillatory modes with spectral peaks at 7–8 yr and in the quasi-biennial and quasi-quadrennial bands. The interactions between the three regions were investigated in the light of the synchronization theory of chaotic oscillators. The theory was applied here by combining multichannel singular-spectrum analysis (M-SSA) with a recently introduced varimax rotation of the M-SSA eigenvectors. A key result is that the 7–8-yr and 2.7-yr oscillatory modes in all three regions are synchronized, at least in part. The energy-ratio analysis, as well as time-lag results, suggest that the NAO plays a leading role in the 7–8-yr mode. It was found therewith that the South Asian monsoon is not slaved to forcing from the equatorial Pacific, although it does interact strongly with it. The time-lag analysis pinpointed this to be the case in particular for the quasi-biennial oscillatory modes. Overall, these results confirm that the approach of synchronized oscillators, combined with varimax-rotated M-SSA, is a powerful tool in studying teleconnections between regional climate modes and that it helps identify the mechanisms that operate in various frequency bands. This approach should be readily applicable to ocean modes of variability and to the problems of air-sea interaction as well. 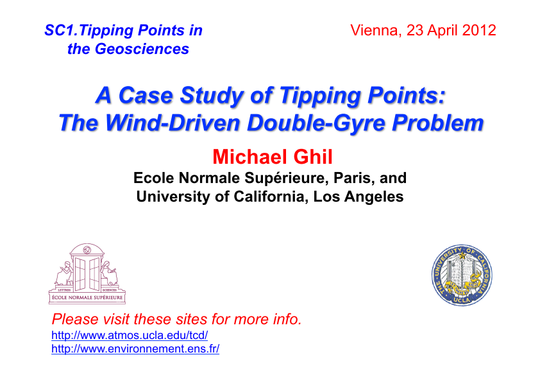 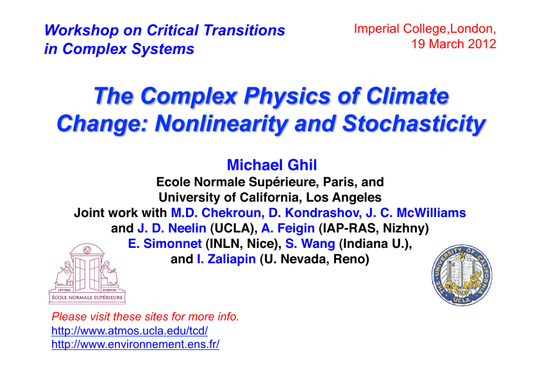 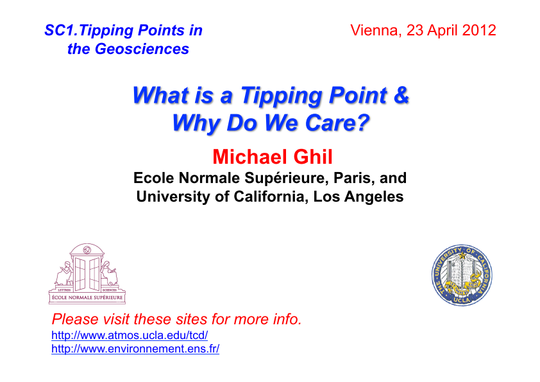 The atmospheric effects of sea surface temperature (SST) anomalies over and near western boundary currents are a matter of renewed interest. The general circulation model (GCM) of the Laboratoire de Météorologie Dynamique (LMD-Z) has a zooming capability that allows a regionally increased resolution. This GCM is used to analyze the impact of a sharp SST front in the North Atlantic Ocean: two simulations are compared, one with climatological SSTs and the other with an enhanced Gulf Stream front. The results corroborate the theory developed previously by the present team to explain the impact of oceanic fronts. In this theory, the vertical velocity at the top of the atmospheric boundary layer has two components: mechanical and thermal. It is the latter that is dominant in the tropics, while in midlatitudes both play a role in determining the wind convergence above the boundary layer. The strengthened SST front does generate the previously predicted stronger ascent above the warmer water south of the front and stronger descent above the colder waters to the north. In the GCM simulations, the ascent over the warm anomalies is deeper and more intense than the descent.