This chapter considers the sub-seasonal–to–seasonal (S2S) prediction problem as intrinsically more difficult than either short-range weather prediction or interannual–to–multidecadal climate prediction. The difficulty arises from the comparable importance of atmospheric initial states and of parameter values in determining the atmospheric evolution on the S2S time scale. The chapter relies on the theoretical framework of dynamical systems and the practical tools this framework helps provide to low-order modeling and prediction of S2S variability. The emphasis is on mid-latitude variability and the complementarity of the nonlinear-waves vs. multiple-regime points of view in understanding this variability. Empirical model reduction and the forecast skill of the models thus produced in real-time prediction are reviewed.

Ghil M. Circulation Regimes for the Hitchhiker Through the Galaxy. Physics school on Diversity of Planetary Circulation Regimes, in our Solar System and beyond, Les Houches, France, March 2017 [Internet]. 2017. Conference websiteAbstract 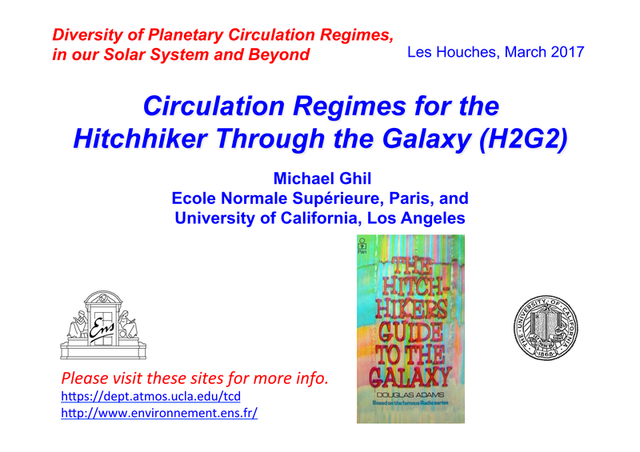 A low-order quasigeostrophic double-gyre ocean model is subjected to an aperiodic forcing that mimics time dependence dominated by interdecadal variability. This model is used as a prototype of an unstable and nonlinear dynamical system with time-dependent forcing to explore basic features of climate change in the presence of natural variability. The study relies on the theoretical framework of nonautonomous dynamical systems and of their pullback attractors (PBAs), that is, of the time-dependent invariant sets attracting all trajectories initialized in the remote past. The existence of a global PBA is rigorously demonstrated for this weakly dissipative nonlinear model. Ensemble simulations are carried out and the convergence to PBAs is assessed by computing the probability density function (PDF) of localization of the trajectories. A sensitivity analysis with respect to forcing amplitude shows that the PBAs experience large modifications if the underlying autonomous system is dominated by small-amplitude limit cycles, while less dramatic changes occur in a regime characterized by large-amplitude relaxation oscillations. The dependence of the attracting sets on the choice of the ensemble of initial states is then analyzed. Two types of basins of attraction coexist for certain parameter ranges; they contain chaotic and nonchaotic trajectories, respectively. The statistics of the former does not depend on the initial states whereas the trajectories in the latter converge to small portions of the global PBA. This complex scenario requires separate PDFs for chaotic and nonchaotic trajectories. General implications for climate predictability are finally discussed.

We revisit a recent claim that the Earth's climate system is characterized by sensitive dependence to parameters; in particular, that the system exhibits an asymmetric, large-amplitude response to normally distributed feedback forcing. Such a response would imply irreducible uncertainty in climate change predictions and thus have notable implications for climate science and climate-related policy making. We show that equilibrium climate sensitivity in all generality does not support such an intrinsic indeterminacy; the latter appears only in essentially linear systems. The main flaw in the analysis that led to this claim is inappropriate linearization of an intrinsically nonlinear model; there is no room for physical interpretations or policy conclusions based on this mathematical error. Sensitive dependence nonetheless does exist in the climate system, as well as in climate models – albeit in a very different sense from the one claimed in the linear work under scrutiny – and we illustrate it using a classical energy balance model (EBM) with nonlinear feedbacks. EBMs exhibit two saddle-node bifurcations, more recently called "tipping points," which give rise to three distinct steady-state climates, two of which are stable. Such bistable behavior is, furthermore, supported by results from more realistic, nonequilibrium climate models. In a truly nonlinear setting, indeterminacy in the size of the response is observed only in the vicinity of tipping points. We show, in fact, that small disturbances cannot result in a large-amplitude response, unless the system is at or near such a point. We discuss briefly how the distance to the bifurcation may be related to the strength of Earth's ice-albedo feedback.

The recent development of dense and continuously operating Global Navigation Satellite System (GNSS) networks worldwide has led to a significant increase in geodetic data sets that sometimes capture transient-deformation signals. It is challenging, however, to extract such transients of geophysical origin from the background noise inherent to GNSS time series and, even more so, to separate them from other signals, such as seasonal redistributions of geophysical fluid mass loads. In addition, because of the very large number of continuously recording GNSS stations now available, it has become impossible to systematically inspect each time series and visually compare them at all neighboring sites. Here we show that Multichannel Singular Spectrum Analysis (M-SSA), a method derived from the analysis of dynamical systems, can be used to extract transient deformations, seasonal oscillations, and background noise present in GNSS time series. M-SSA is a multivariate, nonparametric, statistical method that simultaneously exploits the spatial and temporal correlations of geophysical fields. The method allows for the extraction of common modes of variability, such as trends with nonconstant slopes and oscillations shared across time series, without a priori hypotheses about their spatiotemporal structure or their noise characteristics. We illustrate this method using synthetic examples and show applications to actual GPS data from Alaska to detect seasonal signals and microdeformation at the Akutan active volcano. The geophysically coherent spatiotemporal patterns of uplift and subsidence thus detected are compared to the results of an idealized model of such processes in the presence of a magma chamber source.