Our research is centered around the dynamics of the ocean circulation, but spans a variety of scientific disciplines ranging from millennial-scale climate change to the mechanics of ice sheets. These pages are intended to provide a summary of current research foci, but the topics described here are far from exhaustive.

The figure/animation below encapsulates many of the key science questions that motivate our research:

(Click here or on the image below to see an animated version.) 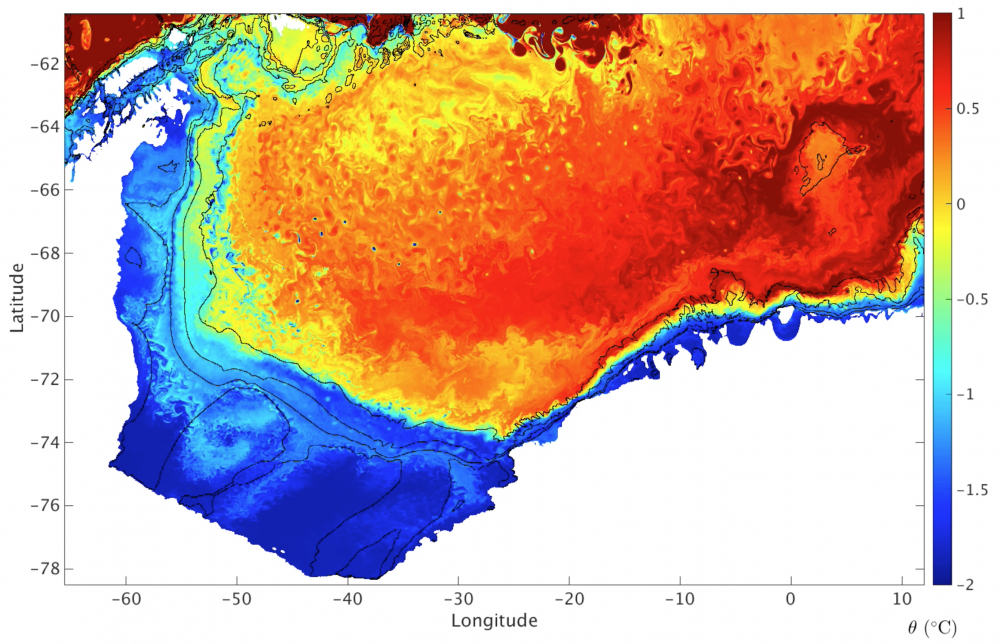 In the past decades it has become clear that the ocean is a highly turbulent fluid. The figure/animation above serves to illustrate this: in addition to the large-scale variations between the coastal ocean and offshore, the ocean's temperature field is heavily distorted down to the smallest visible scales by "eddies", ubiquitous vortical features found throughout the ocean. Much of our research is concerned with the way these relatively small-scale turbulent flows contribute to the the continental-scale ocean circulation around the Antarctic margins, for example, by mixing warm offshore waters toward the Antarctic coastline, where it can melt the continent's marine-terminating glaciers.

The impact of these processes is also felt globally because they modulate coastal production of Antarctic Bottom Water. This dense water sinks and spreads away from Antarctica, ultimately filling more than one-third of the global sub-surface ocean and playing a key role in global biogeochemical cycles, for example via the transport of oxygen and storage of carbon in the deep ocean. Thus another central component of our research addresses the way surface processes and eddies shape the global "overturning circulation" that spreads dense water formed at high latitudes and ultimately returns them to the ocean surface.

For a complete list of our research output, please refer to our Publications page.