Optimal control of harvested population at the edge of extinction in an unprotected area, is considered. The underlying population dynamics is governed by a Kolmogorov-Petrovsky-Piskunov equation with a harvesting term and space-dependent coefficients while the control consists of transporting individuals from a natural reserve. The nonlinear optimal control problem is approximated by means of a Galerkin scheme. Convergence result about the optimal controlled solutions and error estimates between the corresponding optimal controls, are derived. For certain parameter regimes, nearly optimal solutions are calculated from a simple logistic ordinary differential equation (ODE) with a harvesting term, obtained as a Galerkin approximation of the original partial differential equation (PDE) model. A critical allowable fraction of the reserve's population is inferred from the reduced logistic ODE with a harvesting term. This estimate obtained from the reduced model allows us to distinguish sharply between survival and extinction for the full PDE itself, and thus to declare whether a control strategy leads to success or failure for the corresponding rescue operation while ensuring survival in the reserve's population. In dynamical terms, this result illustrates that although continuous dependence on the forcing may hold on finite-time intervals, a high sensitivity in the system's response may occur in the asymptotic time. We believe that this work, by its generality, establishes bridges interesting to explore between optimal control problems of ODEs with a harvesting term and their PDE counterpart.

2011
Roques, Lionel, and Mickaël D. Chekroun. 2011. “Probing chaos and biodiversity in a simple competition model.” Ecological Complexity 8 (1): 98 - 104. Publisher's Version Abstract
Recent theoretical work has reported that chaos facilitates biodiversity. In this paper, we study the lowest-dimensional Lotka–Volterra competition model that exhibits chaotic trajectories, a model with four species. We observe that interaction and growth parameters leading respectively to extinction of three species, or coexistence of two, three or four species, are for the most part arranged in large regions with clear boundaries. Small islands of parameters that lead to chaos are also found. These regions where chaos occurs are, in the three cases presented here, situated at the interface between a non-chaotic four-species region and a region where extinction occurs. This implies a high sensitivity of biodiversity with respect to parameter variations in the chaotic regions. Additionally, in regions where extinction occurs which are adjacent to chaotic regions, the computation of local Lyapunov exponents reveals that a possible cause of extinction is the overly strong fluctuations in species abundances induced by local chaos at the beginning of the interval of study. For this model, we conclude that biodiversity is a necessary condition for chaos rather than a consequence of chaos, which can be seen as a signal of a high extinction risk.
2010
Roques, Lionel, and M. D. Chekroun. 2010. “Does reaction-diffusion support the duality of fragmentation effect?” Ecological Complexity 7 (1): 100 - 106. Publisher's Version Abstract

There is a gap between single-species model predictions, and empirical studies, regarding the effect of habitat fragmentation per se, i.e., a process involving the breaking apart of habitat without loss of habitat. Empirical works indicate that fragmentation can have positive as well as negative effects, whereas, traditionally, single-species models predict a negative effect of fragmentation. Within the class of reaction-diffusion models, studies almost unanimously predict such a detrimental effect. In this paper, considering a single-species reaction-diffusion model with a removal – or similarly harvesting – term, in two dimensions, we find both positive and negative effects of fragmentation of the reserves, i.e., the protected regions where no removal occurs. Fragmented reserves lead to higher population sizes for time-constant removal terms. On the other hand, when the removal term is proportional to the population density, higher population sizes are obtained on aggregated reserves, but maximum yields are attained on fragmented configurations, and for intermediate harvesting intensities.

2007
Roques, L., and M. D. Chekroun. 2007. “On Population resilience to external perturbations.” SIAM Journal on Applied Mathematics 68 (1): 133—153. Publisher's Version Abstract
We study a spatially explicit harvesting model in periodic or bounded environments. The model is governed by a parabolic equation with a spatially dependent nonlinearity of Kolmogorov–Petrovsky–Piskunov type, and a negative external forcing term $-\delta$. Using sub- and supersolution methods and the characterization of the first eigenvalue of some linear elliptic operators, we obtain existence and nonexistence results as well as results on the number of stationary solutions. We also characterize the asymptotic behavior of the evolution equation as a function of the forcing term amplitude. In particular, we define two critical values $\delta^*$ and $\delta_2$ such that, if $\delta$ is smaller than $\delta^*$, the population density converges to a “significant" state, which is everywhere above a certain small threshold, whereas if $\delta$ is larger than $\delta_2$, the population density converges to a “remnant" state, everywhere below this small threshold. Our results are shown to be useful for studying the relationships between environmental fragmentation and maximum sustainable yield from populations. We present numerical results in the case of stochastic environments. 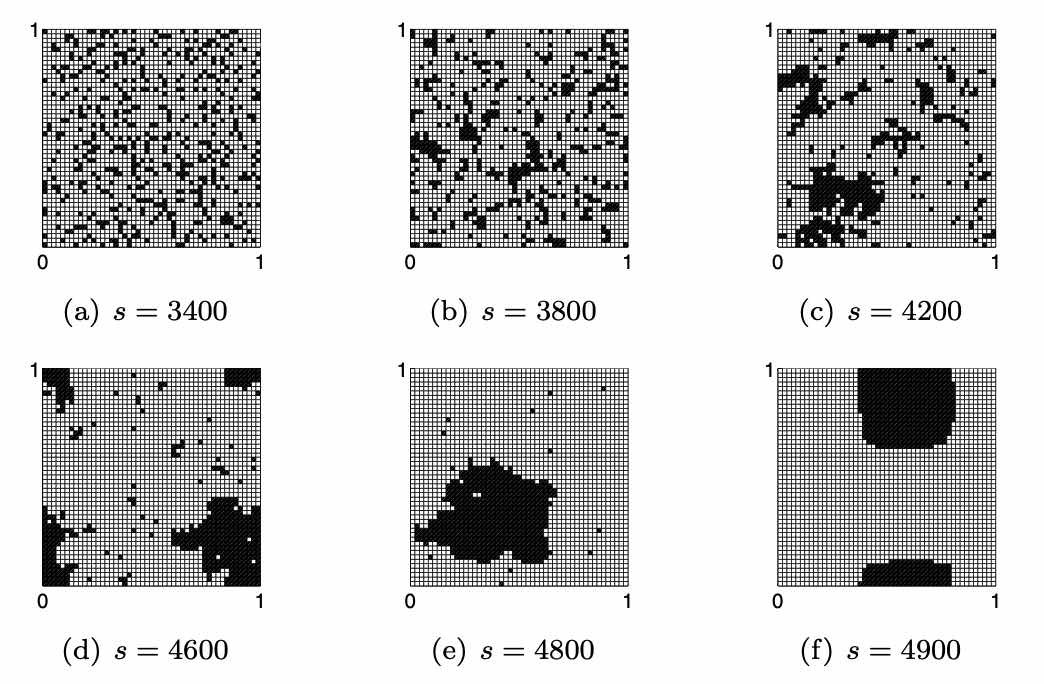