This article revisits the approximation problem of systems of nonlinear delay differential equations (DDEs) by a set of ordinary differential equations (ODEs). We work in Hilbert spaces endowed with a natural inner product including a point mass, and introduce polynomials orthogonal with respect to such an inner product that live in the domain of the linear operator associated with the underlying DDE. These polynomials are then used to design a general Galerkin scheme for which we derive rigorous convergence results and show that it can be numerically implemented via simple analytic formulas. The scheme so obtained is applied to three nonlinear DDEs, two autonomous and one forced: (i) a simple DDE with distributed delays whose solutions recall Brownian motion; (ii) a DDE with a discrete delay that exhibits bimodal and chaotic dynamics; and (iii) a periodically forced DDE with two discrete delays arising in climate dynamics. In all three cases, the Galerkin scheme introduced in this article provides a good approximation by low-dimensional ODE systems of the DDE's strange attractor, as well as of the statistical features that characterize its nonlinear dynamics. 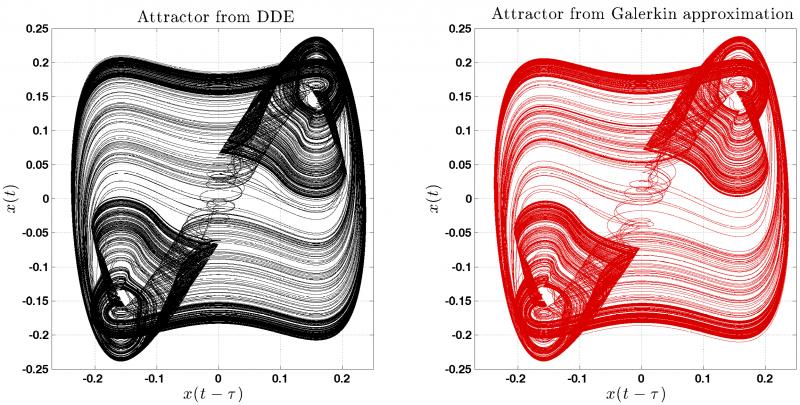