The problem of emergence of fast gravity-wave oscillations in rotating, stratified flow is reconsidered. Fast inertia-gravity oscillations have long been considered an impediment to initialization of weather forecasts, and the concept of a “slow manifold” evolution, with no fast oscillations, has been hypothesized. It is shown on a reduced Primitive Equation model introduced by Lorenz in 1980 that fast oscillations are absent over a finite interval in Rossby number but they can develop brutally once a critical Rossby number is crossed, in contradistinction with fast oscillations emerging according to an exponential smallness scenario such as reported in previous studies, including some others by Lorenz. The consequences of this dynamical transition on the closure problem based on slow variables is also discussed. In that respect, a novel variational perspective on the closure problem exploiting manifolds is introduced. This framework allows for a unification of previous concepts such as the slow manifold or other concepts of “fuzzy” manifold. It allows furthermore for a rigorous identification of an optimal limiting object for the averaging of fast oscillations, namely the optimal parameterizing manifold (PM). It is shown through detailed numerical computations and rigorous error estimates that the manifold underlying the nonlinear Balance Equations provides a very good approximation of this optimal PM even somewhat beyond the emergence of fast and energetic oscillations. 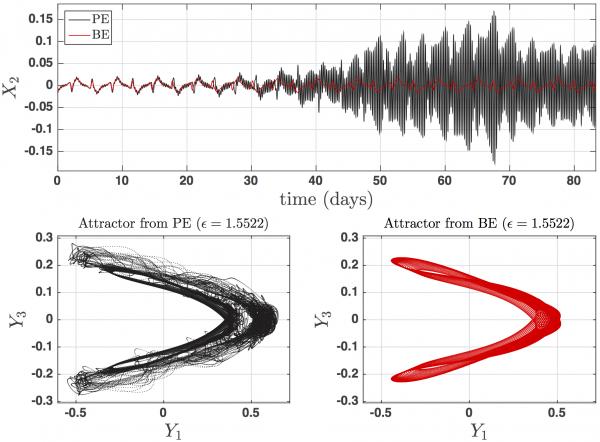