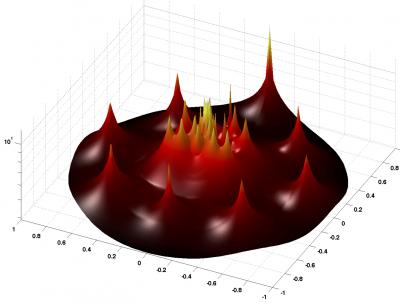 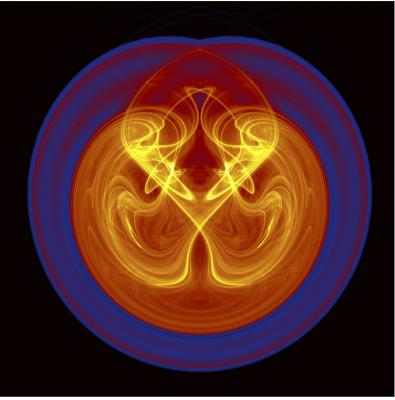 Chekroun, Mickaël David, Alexis Tantet, Henk A. Dijkstra, and J. David Neelin. Submitted. “Ruelle-Pollicott Resonances of Stochastic Systems in Reduced State Space. Part I: Theory”. arXiv's link Abstract
A theory of Ruelle-Pollicott (RP) resonances for stochastic systems is introduced. These resonances are defined as the eigenvalues of the generator (Kolmogorov operator) of a given stochastic system. By relying on the theory of Markov semigroups, decomposition formulas of correlation functions and power spectral densities (PSDs) in terms of RP resonances are then derived. These formulas describe, for a broad class of stochastic differential equations (SDEs), how the RP resonances characterize the decay of correlations as well as the signal's oscillatory components manifested by peaks in the PSD. It is then shown that a notion reduced RP resonances can be rigorously defined, as soon as the dynamics is partially observed within a reduced state space V. These reduced resonances are obtained from the spectral elements of reduced Markov operators acting on functions of the state space V , and can be estimated from series. When the sampling rate (in time) at which the observations are collected is either sufficiently small or large, it is shown that the reduced RP resonances approximate the RP resonances of the generator of the conditional expectation in V , i.e. the optimal reduced system in V obtained by averaging out the contribution of the unobserved variables. The approach is illustrated on a stochastic slow-fast system for which it is shown that the reduced RP resonances allow for a good reconstruction of the correlation functions and PSDs, even when the timescale separation is weak. The companions articles, Part II[TCND19a] and Part III [TCND19b], deal with further practical aspects of the theory presented in this contribution. One important byproduct consists of the diagnosis usefulness of stochastic dynamics that RP resonances offer. This is illustrated in the case of a stochastic Hopf bifurcation in Part II. There, it is shown that such a bifurcation has a clear signature in terms of the geometric organization of the RP resonances in the left half plane. This analysis provides thus an unambiguous signature of nonlinear oscillations contained in a noisy signal and that can be extracted from time series. By relying then on the theory of reduced RP resonances presented in this contribution, Part III addresses then the question of detection and characterization of such oscillations in a high-dimensional stochastic system, namely the Cane-Zebiak model of El Ni{ñ}o-Southern Oscillation subject to noise modeling fast atmospheric fluctuations.
Chekroun, Mickaël D., Jeroen S.W. Lamb, Christian J. Pangerl, and Martin Rasmussen. Submitted. “A Girsanov approach to slow parameterizing manifolds in the presence of noise”. arXiv's link Abstract

Chekroun, Mickaël D., Honghu Liu, and James C. McWilliams. 2019. “Variational approach to closure of nonlinear dynamical systems: Autonomous case.” Journal of Statistical Physics. Publisher's Version Abstract
A general, variational approach to derive low-order reduced systems for nonlinear systems subject to an autonomous forcing, is introduced. The approach is based on the concept of optimal parameterizing manifold (PM) that substitutes the more classical notion of slow manifold or invariant manifold when breakdown of slaving occurs. An optimal PM provides the manifold that describes the average motion of the neglected scales as a function of the resolved scales and allows, in principle, for determining the best vector field of the reduced state space that describes e.g. the dynamics' slow motion. The underlying optimal parameterizations are approximated by dynamically-based formulas derived analytically from the original equations. These formulas are contingent upon the determination of only a few (scalar) parameters obtained from minimization of cost functionals, depending on training dataset collected from direct numerical simulation. In practice, a training period of length comparable to a characteristic recurrence or decorrelation time of the dynamics, is sufficient for the efficient derivation of optimized parameterizations. Applications to the closure of low-order models of Atmospheric Primitive Equations and Rayleigh-Bénard convection are then discussed. The approach is finally illustrated --- in the context of the Kuramoto-Sivashinsky turbulence --- as providing efficient closures without slaving for a cutoff scale kc placed within the inertial range and the reduced state space is just spanned by the unstable modes, without inclusion of any stable modes whatsoever. The underlying optimal PMs obtained by our variational approach are far from slaving and allow for remedying the excessive backscatter transfer of energy to the low modes encountered by classical invariant manifold approximations in their standard forms when the latter are used at this cutoff wavelength.
Cao, Yining, Mickaël D. Chekroun, Roger Temam, and Aimin Huang. 2019. “Mathematical analysis of the Jin-Neelin model of El Nino-Southern-Oscillation.” Chinese Annals of Mathematics, Series B 40 (1): 1–38. Abstract

The Jin-Neelin model for the El Niño–Southern Oscillation (ENSO for short) is considered for which the authors establish existence and uniqueness of global solutions in time over an unbounded channel domain. The result is proved for initial data and forcing that are sufficiently small. The smallness conditions involve in particular key physical parameters of the model such as those that control the travel time of the equatorial waves and the strength of feedback due to vertical-shear currents and upwelling; central mechanisms in ENSO dynamics.

From the mathematical view point, the system appears as the coupling of a linear shallow water system and a nonlinear heat equation. Because of the very different nature of the two components of the system, the authors find it convenient to prove the existence of solution by semi-discretization in time and utilization of a fractional step scheme. The main idea consists of handling the coupling between the oceanic and temperature components by dividing the time interval into small sub-intervals of length k and on each sub-interval to solve successively the oceanic component, using the temperature T calculated on the previous sub-interval, to then solve the sea-surface temperature (SST for short) equation on the current sub-interval. The passage to the limit as k tends to zero is ensured via a priori estimates derived under the aforementioned smallness conditions.

The response of a low-frequency mode of climate variability, El Niño–Southern Oscillation, to stochastic forcing is studied in a high-dimensional model of intermediate complexity, the fully-coupled Cane–Zebiak model (Zebiak and Cane 1987), from the spectral analysis of Markov operators governing the decay of correlations and resonances in the power spectrum. Noise-induced oscillations excited before a supercritical Hopf bifurcation are examined by means of complex resonances, the reduced Ruelle–Pollicott (RP) resonances, via a numerical application of the reduction approach of the first part of this contribution (Chekroun et al. 2019) to model simulations. The oscillations manifest themselves as peaks in the power spectrum which are associated with RP resonances organized along parabolas, as the bifurcation is neared. These resonances and the associated eigenvectors are furthermore well described by the small-noise expansion formulas obtained by Gaspard (2002) and made explicit in the second part of this contribution (Tantet et al. 2019). Beyond the bifurcation, the spectral gap between the imaginary axis and the real part of the leading resonances quantifies the diffusion of phase of the noise-induced oscillations and can be computed from the linearization of the model and from the diffusion matrix of the noise. In this model, the phase diffusion coefficient thus gives a measure of the predictability of oscillatory events representing ENSO. ENSO events being known to be locked to the seasonal cycle, these results should be extended to the non-autonomous case. More generally, the reduction approach theorized in Chekroun et al. (2019), complemented by our understanding of the spectral properties of reference systems such as the stochastic Hopf bifurcation, provides a promising methodology for the analysis of low-frequency variability in high-dimensional stochastic systems.

A four-dimensional nonlinear spectral ocean model is used to study the transition to chaos induced by periodic forcing in systems that are nonchaotic in the autonomous limit. The analysis relies on the construction of the system’s pullback attractors (PBAs) through ensemble simulations, based on a large number of initial states in the remote past. A preliminary analysis of the autonomous system is carried out by investigating its bifurcation diagram, as well as by calculating a metric that measures the mean distance between two initially nearby trajectories, along with the system’s entropy. We find that nonchaotic attractors can still exhibit sensitive dependence on initial data over some time interval; this apparent paradox is resolved by noting that the dependence only concerns the phase of the periodic trajectories, and that it disappears once the latter have converged onto the attractor. The periodically forced system, analyzed by the same methods, yields periodic or chaotic PBAs depending on the periodic forcing’s amplitude ε. A new diagnostic method – based on the cross-correlation between two initially nearby trajectories – is proposed to characterize the transition between the two types of behavior. Transition to chaos is found to occur abruptly at a critical value εc and begins with the intermittent emergence of periodic oscillations with distinct phases. The same diagnostic method is finally shown to be a useful tool for autonomous and aperiodically forced systems as well.