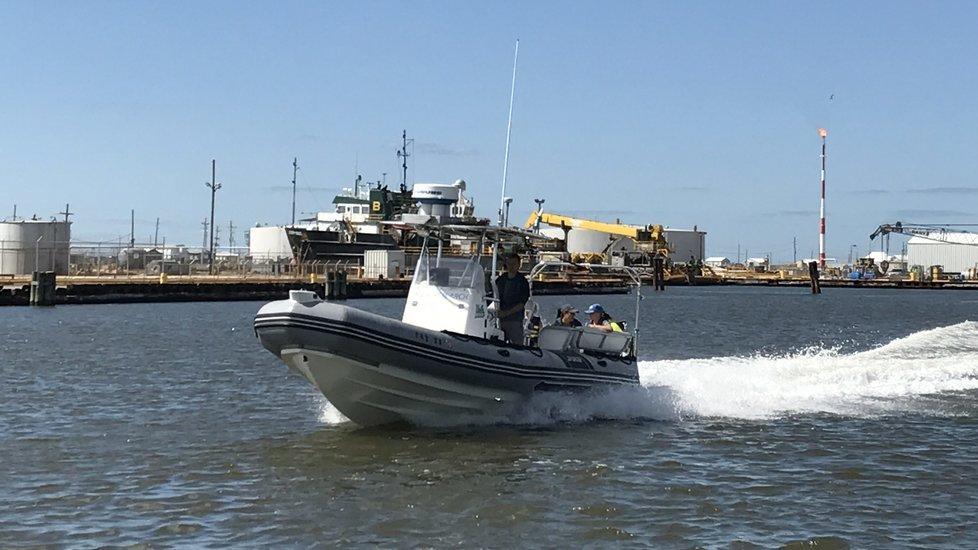 The UCLA Zodiac and its myriad array of on-board instruments have primarily been designed to measure oceanic phenomena that can be collectively grouped under the moniker of ‘submesocales.’ Submesoscales characterize dynamical features in the ocean that typically have sizes less than 10km (though this number varies significantly with Latitude) in the horizontal and are often concentrated near the ocean surface. These submesoscale features, the most common manifestations of which are fronts and eddies, are short lived with approximate time periods that range from a few hours to a few days. Therefore to measure these features accurately and characterize their dynamical evolution, a fast deployment vessel like the Zodiac is ideal.

The Zodiac has three fundamental instrumental units that taken together are typically only found on larger oceanographic vessels, making this a unique platform for its size class. A surface sampler measures the surface Temperature, Salinity, Chlorophyll and dissolved Carbon dioxide concentrations at the ocean surface, which can be viewed live, on the ship computer as the measurements are being conducted. Often sharp transitions in Temperature and Salinity, a hallmark of oceanic fronts, can be viewed immediately, leading to a focused deployment of the other instruments on board for more in-depth measurements.

Once a feature, like a front, is located through the live surface sampler, a Towed Instrument Array (TIA) can be deployed at the stern of the Zodiac.   The TIA consists of a line of instruments, that are placed at about half-meter vertical intervals, measuring temperature and salinity to depths as deep as 30m. Finally, a fast-sampling (up to 16 times a second) Acoustic Doppler Current Profiler measures the speed of the ocean currents to depths of 20m. Both the TIA and the ADCP can be deployed while the Zodiac is moving at speeds as high as 10 knots.

Knowledge of the ocean currents, together with the temperature and salinity allows a detailed and high-resolution (in both space and time) reconstruction of the vertical structure of upper ocean submesoscales, a critical step in understanding their physics.