My main research interests are:

For a plain language press release from UCLA on this work, see: www.physicalsciences.ucla.edu/spotlight-ken-zhao/ 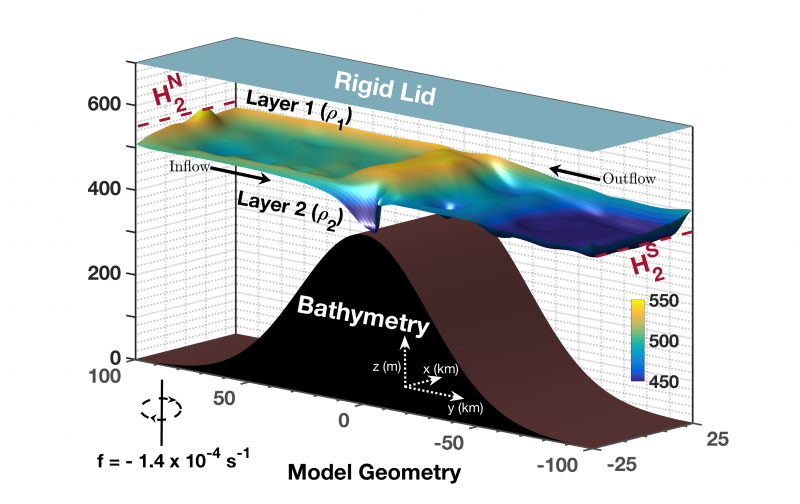 Bathymetric sills are common features in the ocean-filled cavities beneath the fastest-retreating floating ice shelves in West Antarctica and northern Greenland. The sills can be high enough to obstruct the cavity circulation and thereby modulate glacial melt rates. This study focuses on the idealized problem of diabatically-driven, sill-constrained overturning circulation in a cavity. The circulation in warm ice shelf cavities consists of warm, dense, inflowing waters at depth and cold, less-dense, outflowing water, which exhibits an approximately two-layer structure in observations. We use a two-layer isopycnal hydrostatic model to study the cross-sill exchange of these waters in ice shelf cavities wide enough to be rotationally-dominated. A quasi-geostrophic constraint is determined for the transport imposed by the stratification. Relative to this constraint, the key parameters controlling the transport and its variability are the sill height relative to the bottom layer thickness and the strength of the drag relative to the potential vorticity (PV) gradient imposed by the sill. By varying these two key parameters, we simulate a diversity of flow phenomena. For a given meridional pressure gradient, the cross-sill transport is insensitive to sill height and drag in the drag-dominated regime, and is somewhat sensitive to both in the eddy-permitting, low-drag regime. We present theoretical ideas to explain the flow characteristics: a Stommel boundary layer for the drag-dominated regime; mean-eddy PV balances and energy conversion in the low-drag, low-sill regime; and hydraulic control in the low-drag, high-sill regime, with various estimates for transport in each of these regimes.

The connections between tidewater glaciers and the continental shelf waters are modulated and controlled by fjords that are geometrically complex with both internal and external drivers of variability. A strong overturning circulation driven by near-glacier buoyancy forcing transports heat towards the glaciers and meltwater away and is postulated to control the ocean-driven melt of glaciers in Greenland and Antarctica. However, it remains unclear which factors control the exchange rate between fjords and the open ocean; proposed candidates include buoyancy forcing at the surface and at depth, wind stresses, coastal and shelf currents, bathymetry, and mixing processes.
This gap in understanding hinders our ability to estimate the ocean’s current and future contribution to glacial melt, since we cannot accurately translate offshore variations in heat content to glacial melt rates. To address this, we conduct idealized numerical simulations using an isopycnal model with domains consisting of continental shelves and fjords representative of those in Greenland and the West Antarctic Peninsula. Our results show the strength of the overturning circulation (renewal of fjord waters) is controlled by three factors: the eddy transport from the open ocean to the fjord mouth, the strength of the water mass transformation via plume entrainment at the fjord head, and geometric/dynamic controls at the fjord mouth that act to constrain the overturning. Our results highlight a comprehensive and previously unrecognized role for geometry in hydraulically controlling access of warm water to ice-shelf faces in Greenland; even in the absence of a sill at the fjord mouth, warm water access may be hydraulically controlled for sufficiently narrow fjord widths. We also show that the fjord’s bulk vorticity balance sets the steady-state horizontal recirculation within the fjord and influences the strength of the coastal current external to the fjord. We present dynamical theories to explain and justify these numerical results. Our results suggest that that previous approaches to translating offshore stratification to fjord heads are likely to lead to substantial errors in estimates of ocean-driven melt. We discuss potential improvements to these approaches based on insights from our model experiments.

We investigate the mean-eddy decomposition of the kinetic and potential energy balance relations in isopycnal coordinates. The differences between the energetics in isopycnal and z-coordinate systems are subtle and are important to the interpretation of results using these models.

(4) Lead Convection in the Weddell Sea (In Prep.)

I am co-supervising a postbac researcher, Kaylie Cohanim, at UCLA along with Andrew Stewart. Kaylie is working on modeling submesoscale eddy generation induced by salt fluxes under sea ice leads using MITgcm.

Satellite altimetric observations and numerical simulations of the extra-tropical and mid-latitude oceans reveal the presence of weak zonal jets, embedded in a field of Rossby waves and mesoscale eddies. The precise mechanisms of jet formation, their interplay with waves and eddies — even their existence as distinct entities — remains a topic of debate. Here we revisit this problem through the lens of freely-evolving periodic shallow water quasi-geostrophic simulations, initialized with both wave and random-field initial conditions.